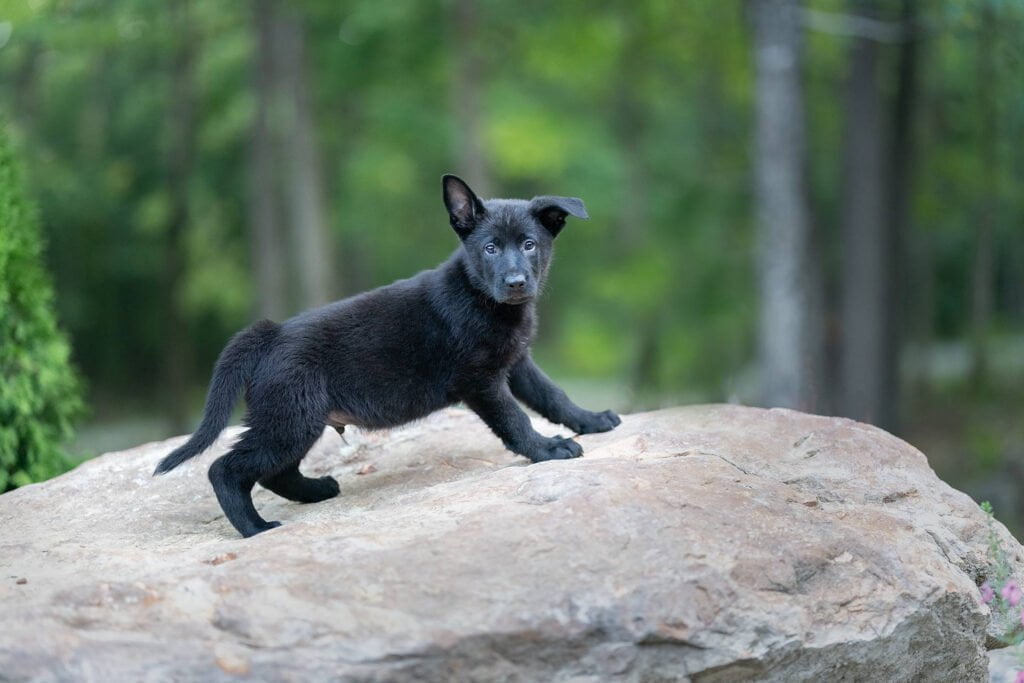 German Shepherds are some of the most active dogs, and anyone who is fortunate enough to share their home with them can attest to that. They are a very smart, bold, and determined breed. To ensure that your German Shepherd is a happy, well-adjusted member of your household, your dog must receive the attention and exercise they need. They are also very strong willed with a dominant nature, so they also require a lot of training. If they don’t get proper training and you don’t control them, they will control you.

For your family and children, a German Shepherd is an excellent choice as a caring companion. They are loyal, friendly, smart, and naturally protective; however, German Shepherds also need lots of socialization and good training to become obedient. If they do not get proper behavioral training, they can develop overly protective behaviors and neurotic habits. Because they are so protective, excel at many dog sports, and are exceptionally loyal, the military and police choose them protect and serve their communities and country.

You might be wondering: what characteristics should I be looking for in my German Shepherd? Well, the answer may vary between different buyers, but generally speaking, you should look for a smart, loyal, and healthy dog. When looking at puppies, it can be hard to tell whether or not they have these traits because it’s too early to tell, but it’s best to look for an active puppy, because it signals that they will likely carry the typical intelligent qualities of a German Shepherd.

As mentioned earlier, the German Shepherd is one of the smartest dogs out there. This is the reason that they are used in police work such as search-and-rescue, or sniffing out bombs and criminals. But their intelligence can sometimes lead to problematic behaviors. If they don’t get positive signals and rewards from you, they might teach themselves how to react, instead of being taught. However, if they receive proper training at a young age, then they will not exercise this type of behavior.

German Shepherds are typically protective dogs, and they always make sure to care for their family, but sometimes this protectiveness leads to bigger problems. They may show aggression towards other animals and strangers to protect you when you’re not in danger. For instance, they might aggressively bark at everyone you come in contact with. It is also crucial to give your dog time to socialize with other people and dogs early on, as this will get them comfortable being around others. Giving them time to interact with others at a young age will help them learn how to handle certain situations later on. North Mountain Kennels can do all these things for any prospective buyer!

Your German Shepherd not only protects you, but they also protect their territory. They are very territorial animals, which is why they are often used as security dogs. Because they are so protective of territory that they believe to be theirs, it may lead them to act out, which can cause an unsafe environment. They may show aggression towards visitors they’ve never seen before. If not properly trained, they won’t be able to tell the difference between a friendly visitor and an unwanted guest.

German Shepherds can also become territorial over food, and toys. They will show aggression by growling, lunging, and barking at other animals and people. There are plenty of ways to prevent this aggressive behavior from developing, but the most common way is to gratify them for calm behavior.

German Shepherds need rigorous physical and mental exercise. These dogs get bored easily, and this can lead to destructive behavior. Just like a young child, German Shepherds may act out if they don’t get attention. They behave in problematic ways, and will start chewing on things they shouldn’t and excessively dig. You can help your dogs by playing with them, or giving training that will help them to reduce their boredom in less destructive ways. If they aren’t properly trained, these habits can lead to a lot of other problems and will continually get worse.

Puppies usually start nipping between five and nine months old. This is considered normal behavior for young dogs; however, German Shepherds are very strong, so it might hurt a lot more than a smaller dog. The solution is as simple as giving your dog some toys. It acts as an outlet to get rid of those urges to bite things, and they’ll learn to only chew on the toys you give them.

Separation anxiety is common in dogs that are close to their owners. German Shepherds are a very caring breed, so not being around the ones they love can take a toll on their mental health if they aren’t trained to be comfortable being alone. They do require a lot of attention, and being gone for long periods of time can stress them out.

To prevent them from getting immense anxiety while you’re away at work, they need to learn how to keep themselves entertained, and get used to you being away. Leaving them lots of toys is one way to help, but it also comes down to them adjusting to you being gone.

German Shepherds are known for their alpha male behavior. If they aren’t properly trained, they will assert dominance over you. To prevent this type of behavior, you need to teach them obedience. If they try to misbehave, show them you’re in charge in a way they will understand.

Being aggressive with them is the worst thing you could do. Not only is it wrong to mistreat your dog, but it will also teach them that aggressive behavior is okay. Asserting your dominance isn’t about showing aggression, it’s about being firm and not letting them push you around.

German Shepherds absorb information like a sponge. They are quick learners, especially as puppies. As they get older, it is harder to break bad habits. The saying, “you can’t teach an old dog new tricks” holds some truth here, which is why it is crucial to give your puppy the proper training they need.

Here at North Mountain Kennels, we have been raising some of the smartest and healthiest German Shepherds for years. We have a team of professional trainers who are experienced in what they do. Our team of experts is the best around, and know everything when it comes to training German Shepherds.


Get Updates on Upcoming Litters From NMK

Get in touch with us today to get answers to your questions.
Contact Us!
North Mountain Kennels breeds DDR and Czech working line German Shepherd puppies.